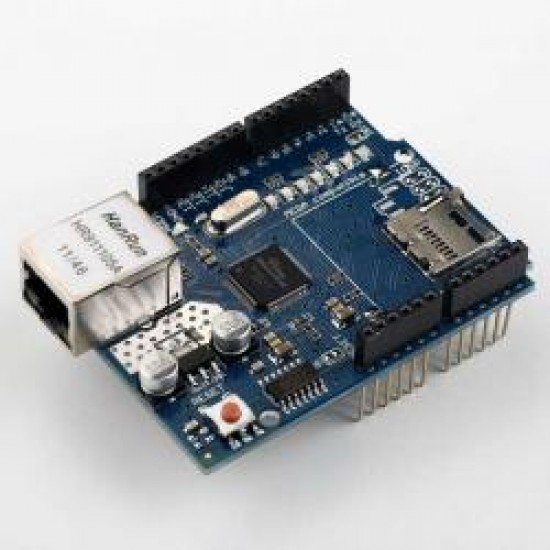 The Arduino Ethernet Shield connects your Arduino to the internet in mere minutes. Just plug this module onto your Arduino board, connect it to your network with an RJ45 cable (not included) and follow a few simple instructions to start controlling your world through the internet. As always with Arduino, every element of the platform – hardware, software, and documentation – is freely available and open-source. This means you can learn exactly how it's made and use its design as the starting point for your own circuits. Hundreds of thousands of Arduino boards are already fueling people’s creativity all over the world, every day.

The Arduino Ethernet Shield allows an Arduino Board to connect to the internet. It is based on the Wiznet W5100 ethernet chip. The Wiznet W5100 provides a network (IP) stack capable of both TCP and UDP. It supports up to four simultaneous socket connections. Use the Ethernet library to write sketches which connect to the internet using the shield. The Ethernet Shield connects to an Arduino board using long wire-wrap headers which extend through the shield. This keeps the pin layout intact and allows another shield to be stacked on to.

We also deal in

Inquiry
Brand: Audionic Model: COAS-76
Audionic Rex-11 Portable Speaker
FEATURES:Bluetooth:User can enjoy music with Bluetooth connectivity far from 30 feet distance.Wired MIC:Connect it with a wired Mic and use it as a lo..
Rs3,240/-
Add to Cart
Add to Wish List Compare this Product
Inquiry
Quickview